Modernisation was the key word for Westfield in what might fittingly be described as the ‘modern era’. Beset by financial worries, the Westfield Council had been forced to register as a Housing Association in December 1975 in a bid to gain eligibility for modernisation grants. The subsequent Government funding paid for 14 houses to be modernised at a cost of £112,000, however, this work only scratched the surface.

With the accounts in a desperate state, the new 1980 Rent Act, which included a ‘right-to-buy’ clause, appeared to provide a timely solution to the troubled Westfield committee. Although charitable housing associations were under no obligation to sell freeholds, it was decided that the partial sale of empty housing stock on the village was sensible: it would bring in much-needed funds, stop certain properties from falling into disrepair, and reduce the village housing to a level that could be maintained, managed and successfully tenanted. Twenty two houses were subsequently sold to sitting tenants, but no stipulation could be made that they later be sold-on to ex-service people. The risk was that there was now a genuine long-term potential for the village’s ex-service ethos and identity to be fractured.

The whole issue had been fraught and there were times that the committee genuinely feared that the village might have to be sold off altogether.The decision was taken to reduce day-to-day administrative and maintenances duties and costs by handing over the practical management of the remaining Westfield properties to a larger, professionally-run organisation.

The charity would, however, retain an on-site employee to look after the welfare of its tenants and ensure that their needs as ex-service people were being met. It would also retain the right to uphold the existing requirements of tenancy, ensuring that only ex-service people would be accepted on the village properties that were not now privately owned. It was ultimately decided to enter into partnership with an organisation that was already well-established in the Lancaster area, the Northern Counties Housing Association (NCHA). 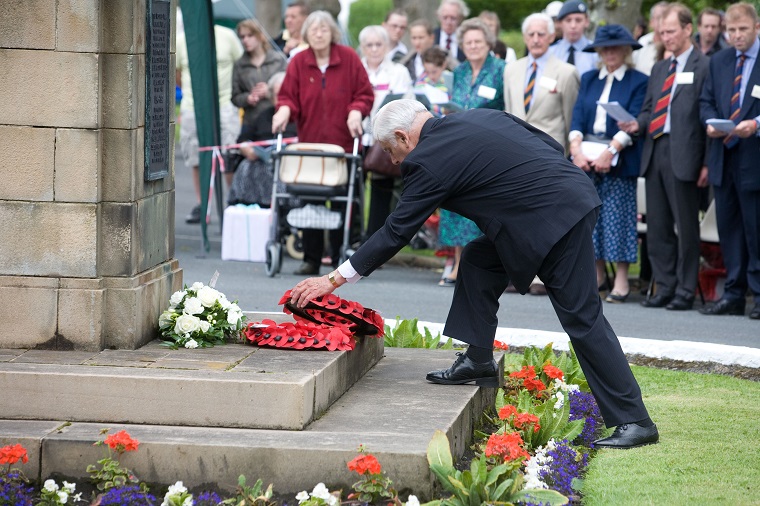 Picture of one of the village’s longest-standing residents, Mr Redpath, laying a commemorative wreath on behalf of all of the residents at the charity’s 90th anniversary.

In 1984, a 35-year lease was agreed for both the Westfield office and the 60 dwellings that hadn’t been sold-off. Central to the deal was a commitment that NCHA would modernise all the dwellings – a pledge that was honoured.

Northern Counties has continued to invest in Westfield, purchasing land within the bounds of the village to create eight flats in 1987 and a further 18 flats in 1994. These new flats helped to address the long-running issue with regard to the provision of suitable properties for elderly tenants. Keeping with tradition, the first development was named in recognition of the then recent conflict in the Falkland Islands and the second, Ley Court, in honour of the then chairman of the Westfield Council, Brigadier Hugh Ley. In the summer of 2013 the blocks that make up the latter development were brought into line with other properties on the village and given battle names (Korea, Aden, Malaya and Balkans) where the former local regiment of the King’s Own and its antecedents had fought.

Prior to this, in November 2010, the Westfield charity had negotiated a new 70-year lease and management agreement with the newly named Guinness Northern Counties. The following year the charity de-registered as a social landlord and changed its name to the Westfield War Memorial Village Lancaster. The charity still has a full-time secretary based in Westfield Office, the former residence of the Storey family, which it bought back out of lease in February 2001.

Investments related directly to the funds released by the house sales in the Eighties continue to meet both the charity’s committments to the tenants while allowing it to provide financial support to other deserving charities which work with necessitous and disabled ex-servicemen and women.