Life between the wars had settled into a comfortable routine on Westfield. There was now a new president, Mr Charles Storey (younger brother of the late Herbert Lushington Storey) whose arrival had provided welcome confirmation that the patronage and financial support that the family had always provided could continue to be relied upon.

If many popular representations of Britain in the Thirties focus on mass unemployment, benefit cuts and poverty, this was also an era of consumer opportunity for those least affected by hardship; and Lancaster’s major employers had ridden the storm. It was a situation reflected in local lifestyles, with the Thirties proving a time of plenty on the village. Pockets of land were sold off on the periphery of the estate at considerable profit and large bequests continued to arrive from wealthy local supporters. In the Westfield Council minutes of October 1936 it was recorded that the village would soon be “absolutely free of debt”. As such, it could afford to embrace the wonders of the modern world, including the decision to introduce electricity to all homes.

However, the trials and tribulations faced by the people of Britain during the Second World War were soon to put the pleasures of domestic comfort in context; not least as men who had fought in “the war to end all wars” now had to watch their own children go off to fight. Part of Westfield House would be used as an ARP centre and 30 evacuee children from Salford would be housed on the village. Major Connell, the village secretary, took over the running of the Local Defence Volunteers and an Air Raid Warden’s post was sited on Westfield, close to a substantial 1.5-acre plot of land for allotments supporting the ‘dig for victory’ campaign.

In total, eight men associated with Westfield (seven of whom were the sons of residents and the other a member of the wider Westfield community via the village social club) would pay the ultimate sacrifice. One family, the Hodkinsons, were to lose two sons. 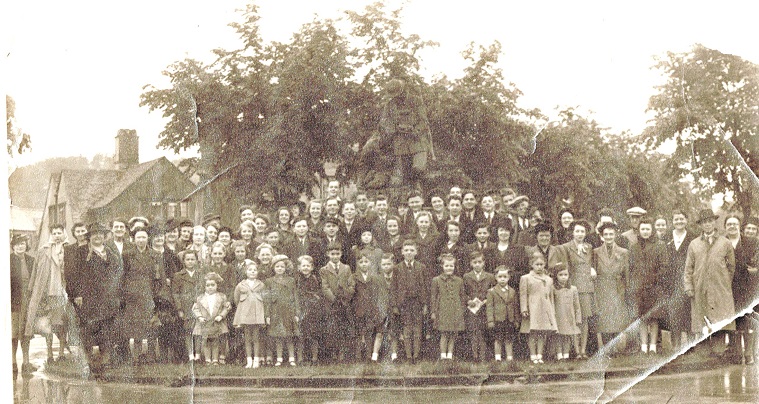 Picture of the women and children of the village going on an outing in the Fifties.

During the war years talk invariably turned to the need for new housing for the victims of this new conflict. However, the cost of building had more than doubled from the last time a major construction project had been undertaken, and once again it would be large private and organisational donations that would save the day.

The war years and subsequent demands of expansion appear to have exhausted a number of the older stalwarts of the village and another Storey would take over at the helm, Captain Alan Storey. One of the first projects he would oversee would be the building of a clutch of properties on a new extension named Porritt Avenue in honour of village benefactor and philanthropost Lt Col Porritt. While its opening in 1952 was suitably celebratory, members of the village council could have been forgiven for harboring feelings of trepidation.

“As usual, our annual difficulty is financial – it is very difficult begging in bad times,” Captain Storey warned those present at the village AGM in April 1952. Many of the properties on the village were old and in need of repair, while general material and maintenance costs had risen massively and large private donations all but “dried up”. However, while the issue of rent rises was mentioned for the first time in 1952, it would be a further six years before the committee was prepared to vote in favour of such a course of action.

However, the problems went beyond the finances: it was now becoming increasingly difficult to find “suitable” tenants. The number of disabled ex-servicemen had fallen massively in the Sixties and Seventies and the properties themselves had become too run-down to be attractive to younger couples.

By 1969, with finances at an all-time low, one committee member stated: “Put plainly, Westfield and what it stood for, 25 years after the end of the Second World War, is of little interest to outsiders.”