At a public meeting at Lancaster Town Hall on November 27th, 1918, an unusual decision was taken: the residents of this historic Lancashire settlement would fund two very different memorials to honour the sacrifices made by their men in the Great War.

The first would be similar to those being discussed at gatherings across the land; a stone monument featuring the names of local fatalities in a location where it could act as a focal point for communal mourning.

The second would involve an altogether unfamiliar idea; the creation of a memorial village that could house and employ local men (and, where necessary, their families) who had come home from the war with severe physical disabilities. It was the brainchild of two well-known Lancastrians, the landscape designer Thomas H Mawson and the industrialist Herbert Lushington Storey.

Both schemes would come to fruition, with the foundation stone for the first properties on the Westfield War Memorial Village, Lancaster, unveiled less than a year later on November 15th, 1919. The village would primarily be for disabled men who had served with the city’s local regiment (the King’s Own Royal Lancasters) and secondly for all Lancastrians who had served and been left with a lasting disability.

It was hoped that this northern community would become the forerunner of a new national movement to help support the worst of the 1.7 million British soldiers who had returned from the war with a disability. In fact, both Mawson and Storey were to be involved in an organisation that would strive, with limited success, to spread the concept across the United Kingdom. 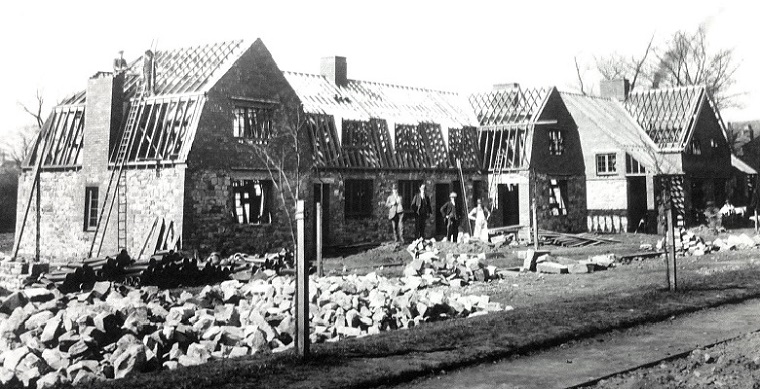 Picture of the construction of properties on Haig Avenue in 1920

At Lancaster the Westfield project moved forward courtesy of the support of leading local figures and businesses, as well as the regiment of the King’s Own Royal Regiment. No donation was too small, with items like Westfield bookmarks being offered to help boost resources, and a fundraising shop opened in the city centre and run by volunteers. It has been suggested that this latter facility may have been Lancaster’s inaugural charity shop.

With the Government reticent to support a scheme which it feared might encourage the segregation of a vulnerable group, it would be larger personal donations that would ultimately prove key to Westfield’s success.

Central to Mawson’s vision was the idea that the village be self-contained and self-sufficient, with workshops, recreational facilities (including a bowling green, children’s playground and tennis courts) and attractive tree-lined avenues with associated planting and allotments. Mawson believed that nature would be essential in helping to restore the equilibrium of men whose bodies had been shattered by the industrialisation of warfare.

In order to remove the economic strain on the tenants weekly rents were set at a peppercorn rate. Westfield’s industrial workshops, aimed at teaching veterans new skills that would enable them to support their families and restore self-esteem, only survived for a brief time. The majority of the Westfield residents appear to have encountered few problems in finding employment outside of the village.

While work in Lancaster was clearly still available, ‘Homes fit for heroes’ remained in short supply and the waiting list for properties on Westfield was high. At the official opening of the village (by Earl Haig in 1924) just 26 cottages had been completed, hosting 26 families made up of 72 adults and 51 children. Typical tenants included veterans of the King’s Own such as former privates Watson, Cragg and Rummley; all of whom had lost a leg or the use of a leg in the Great War.

The number of properties increased at a considerable rate, with the sum raised to 35 by the time a new figurative monument was unveiled at the heart of the village in 1926. Herbert Storey said at the unveiling of the monument he had personally paid for that he hoped for another 35 to 50 properties to be built.

Both Herbert Storey and Thomas Mawson were to die in 1933, but they had lived long enough to see another major property building programme completed in 1932, when 20 new homes were funded by a mortgage from the local corporation.

We do not use cookies and do not collect, use or store personal/sensitive information. OK
Go to Top