Delahunt and the Figurative Monument:

Sculptress Jennifer Delahunt is one of the enigmas of Westfield. The monument that she created in 1926 remains a central and dominant feature of the village, yet little is known about its creator.

Miss Delahunt was commissioned by the Westfield committee to design a monument that would serve as a fitting focal point for the village. She was subsequently reported in the Lancaster Guardian to have said that she felt “honoured” to have been entrusted with such an important job.

Employed as the modelling mistress at the Lancaster School of Art, in the Storey Institute, and later as an art teacher at the Lancaster Grammar School for Girls, she was a graduate of the Manchester Municipal School of Art. At the unveiling of her Westfield monument, in August 1926, Herbert Lushington Storey (who paid for the work completely out of his own pocket) said that he had always wanted a local artist to do the job. He described Miss Delahunt as “most talented”.

The monument shows two life-size figures: one soldier, fit and healthy, is seen providing a drink of water for another who is clearly in distress. The artist’s intention was to capture the ethos behind the creation of the village with the able helping the less able. Now Grade II listed, it is unusual in that it shows a British soldier in a weak and vulnerable condition at a time when the trend was very much to emphasise such victorious qualities as bravery and strength.

The two figures were created in the image of two life models, both of whom were serving members of the King’s Own Royal Regiment: the standing figure is modeled on Private Richard Henry Allen of Rochdale, and the man he is helping a representation of Captain Jack Ward of Walney Island near Barrow.

Created in clay at the Storey Institute, Miss Delahunt’s design was taken to London to be set in bronze. The move away from stone sculpting to pre-cast work in clay had opened the door to a new movement of female sculptors at the end of the 19th century: it appears that large-scale works in the medium had previously been deemed too difficult because of the physical implications of working with heavy stone.

Robert Smith Cragg: Robert was a gunner with the Royal Artillery and died in May 1944 at the age of 34. He was the son of Thomas Cragg and Ada Jane Ann Cragg, who had been among the first three couples to move onto Westfield Village as tenants of one of the two Bibby cottages. Robert was married to Eva and is buried in Skerton Cemetery.

Charles Richard Darwen: A Sergeant Major serving with the 88th Field Regiment of the Royal Artillery, Charles died in August 1943 at the age of 39. He was a prisoner of the Japanese in Singapore at the time of his death. A Territorial Army man, he left a widow and two children at 181 Willow Lane, Lancaster, and is buried in the Kanchanaburi War Cemetery in Thailand. It is believed that he had been an active member of the village’s social club prior to the outbreak of the conflict. The 350th Battery of the 88th Field Regiment RA, of whom he was a member, was based at Dallas Road, Lancaster. 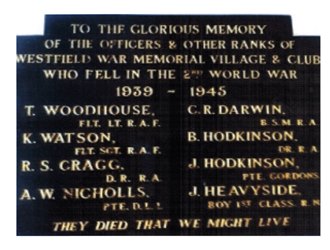 James Heavyside: Although his age is not registered, it seems likely that James Heavyside was still a teenager when he and more than 1,200 other crew went down with the HMS Glorious in the North Sea on 9 June 1940. The ship was sunk by the German battleships Scharnhorst and Gneisenau while working to evacuate British aircraft from Norway. James, who is listed as serving as a ‘Boy 1st Class Gunner’, had been a former pupil at the Skerton Council School and Dallas Road School before finding employment with Ribble Motors. He was a member of the Church Lads’ Brigade and The Lads’ Club of Lancaster and his parents George and Amelia lived at Leyel Terrace, Westfield. His name is on the Plymouth Naval Memorial in Devon, England.

John Bernard Hodkinson: A Territorial Army gunner with the 88th Field Regiment of the Royal Artillery, John died at the age of 26 in September 1944. He was with the same unit as Charles Richard Darwen (above) and had also captured been by the Japanese in Singapore. A driver with his artillery unit who had seen action at Dunkirk, John died when a transport ship went missing, presumed sunk, as it moved British PoWs from Thailand to Tokyo. John left a wife called Doreen at 29 Green Lane, Lancaster, and was the eldest son of William and Mary Hodkinsons of 6 Haig Avenue. He is listed on the memorial at the Kranji War Cemetery, Singapore. 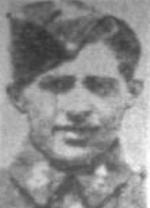 Joseph Hodkinson: Like his elder brother John, Joseph was a gunner with the Royal Artillery, but serving with the 169th Battery of the 8th Battalion Gordan Highlanders – an anti-tank unit. Joseph was killed in action in Burma at the age of 21 in January 1945. An old boy of St Peter’s Cathedral School in Lancaster, he had worked for the LMS Railway when called up in August 1942. Joseph is buried in the Taukkyan War Cemetery in Myanmar, which was formerly Burma. He was the second son of William and Mary, of Westfield, to be killed.

Alfred Nicholls: Alfred was a private serving with the 6th Battalion of the Durham Light Infantry when he died in September 1944 at the age of 19. The battalion had seen considerable action in North Africa, Sicily and North-West Europe, but it is unclear as to how involved Alfred had been or the cause of his death: this due to the fact that he was buried at home in the Lancaster (Skerton) Cemetery. His parents were Alfred and Norah Nicholls of Westfield.

Kenneth Storey Watson: A sergeant serving with the Royal Air Force, Kenneth was 20 when he was killed in action in July 1942. He was among the eight-man crew of a Halifax Mark II heavy bomber when it exploded near the Bavarian town of Stein on the banks of the Elbe River. It appears the aircraft had been involved in a bombing operation on the city of Hamburg. The ground where the plane came down was marshy and the bodies of only three of the men subsequently recovered and buried; with the remains of the other five, including flight engineer Watson, lost. Kenneth was the son of Robert and Olive Watson of Herbert Storey Cottage, Westfield. It appears that they had named their son after the cottage itself, which is dedicated to Kenneth Storey – the son of founder Herbert Lushington Storey.

Thomas Woodhouse: The 27-year-old Flight Lieutenant was killed in June 1945. Thomas’s plane went missing on an air-reconnaisance operation over Burma; he is believed to have been piloting a Spitfire Mk X1 at the time. His body was never recovered and he is commemorated on the Singapore Memorial at Kranji War Cemetery. Thomas, a married man who lived in London, was the only son of Thomas and Anne Woodhouse of the property ‘Tigris’ on the Westfield.

(Thanks to the Lancaster Military Heritage Group for much of the above information regarding Second World War fatalities. Visit http://lancasterwarmemorials.org.uk/datacontents.htm for more details.)